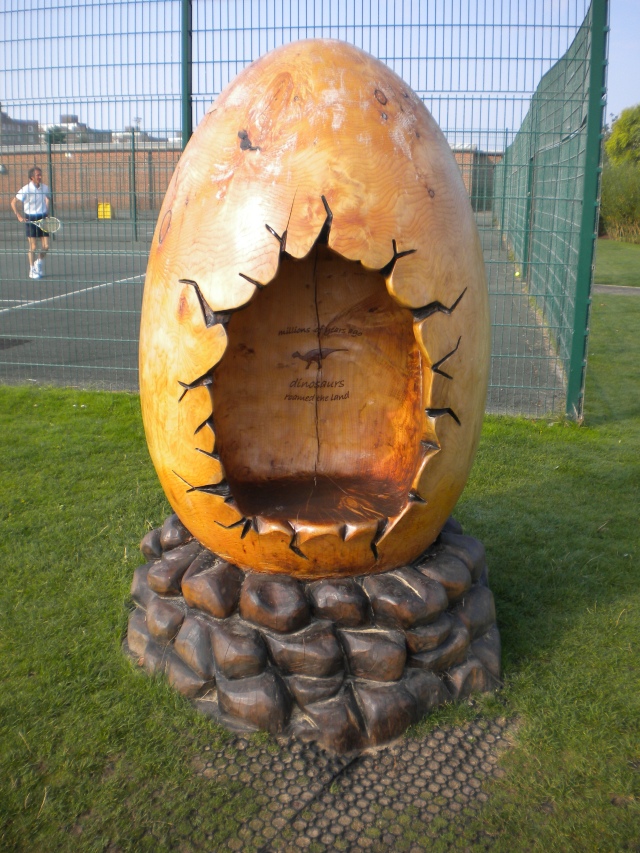 Three chainsaw sculptures were unveiled in Egerton Park on 11th December 2013. They are located within, and close to, the park’s new sensory garden which was originally opened in May 1951 as a scented garden for the blind. Such a public garden at that time was thought to be one of the first of its type in the country. Chainsaw artist Dave Lucas drew inspiration for the sculptures from workshops with Bexhill pupils at St Mary’s School and Glyne Gap School; both schools catering for children with special needs. The resulting sculptures are an acoustic chair in the shape of a dinosaur egg with a hatching baby Iguanodon nearby; three-metre high bracken leaves with mini beasts (butterfly, ladybird, worms and spider) and, finally, a damselfly. However the damselfly soon flew off and was replaced in September 2014 by a frog. There is an information board to accompany each sculpture. Iguanodon dinosaurs roamed Bexhill over 130 million years ago. A number of fossilised Iguanodon footprints have been found along the beach in Bexhill and in 1888 fossil Iguanodon bones were found buried in the ground during the creation of the park’s boating lake. Fossil Iguanodon bones and footprints can be seen in Bexhill Museum. The creation and installation of the sculptures was part of the 21st Century Parks project partnership between Rother District Council and Oostende City Council in Belgium.

This entry was posted in Uncategorized and tagged Chainsaw sculptures, Egerton Park. Bookmark the permalink.